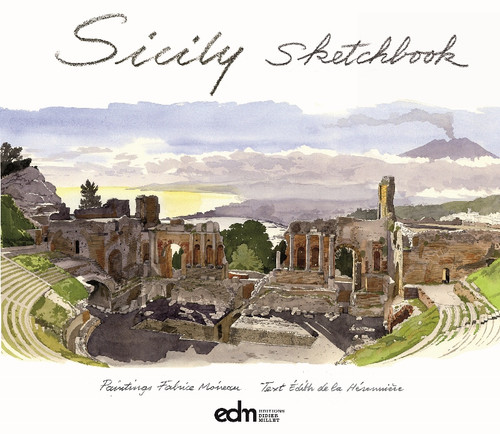 The newest book in the highly successful ¬ëSketchbook¬í series features beautiful watercolours of Sicily. Overlooked by Etna ¬ñ the highest volcano in Europe ¬ñ Sicily, the largest island in the Mediterranean, has always excited interest because of its strategic position and the wealth of its land. Over the centuries, Sicily has come under various rulers and has had a fertile history: Carthaginian, Greek, Roman, Norman, Byzantine and now Italian. It is a model of architectural diversity and cosmopolitanism, with Roman villas, baroque palaces, medieval castles and Islamic vestiges. This book proudly unveils the many facets of Sicily, through its architecture as well as scenes from daily life. Fabrice Moireau spent weeks walking the landscapes of Sicily with his palette and his brushes to depict this land of mountains and lava, of sand and grapevine.