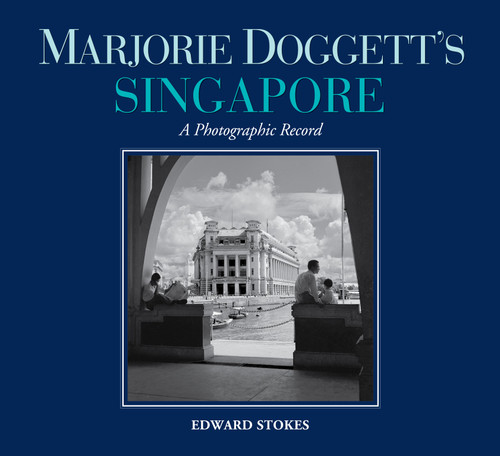 Marjorie Doggett’s Singapore, an evocative interplay of photos and texts, forms a tribute to a pioneer woman photographer, Marjorie Doggett. From 1954–57, camera in hand, she roamed Singapore’s colonial precincts, its port and river, the characteristic ethnic areas and elsewhere. Mind and eye aligned, and aware of the increasing pace of development, Doggett captured for posterity the cityscape in images and with historical texts.

Her work appeared in Characters of Light, the first photo book to fully portray Singapore’s urban setting and architecture. Published in 1957, and reissued in 1985, the book was a pioneer: in its depiction of Singapore’s city and as the first local photographic book by a woman. This work draws on those two publications, both long out of print. In this book, Marjorie Doggett’s photos are enriched by Edward Stokes’ historical and personal texts.

Born in England, Doggett was a self-taught photographer. She had arrived in Singapore in early 1947 with her future husband. In 1962 they became citizens of Singapore, their lifetime home.

The photos and narrative in Marjorie Doggett’s Singapore offer an entirely new presentation. Half of the book’s images are hitherto unpublished. The texts and photos portray Singapore the place, through the prism of Doggett’s life, inspiration and methods. Marjorie Doggett had clear views concerning the preservation of buildings, and in later years her seminal book contributed significantly to the preservation of Singapore’s historic architecture.

"...features a treasure trove of previously unpublished photos of the island"
- The Straits Times

“Coming generations will certainly owe [Marjorie Doggett] a debt of thanks…for preserving much of the best of Singapore’s past as revealed by its buildings as they appeared in the 1950s.”
- John Butler, Asian Review of Books

Edward Stokes studied at Oxford University. A photographer and writer, his special interest is presenting, with texts that reflect the times, photographs taken in the mid-twentieth century. Stokes’ many books have been widely praised.