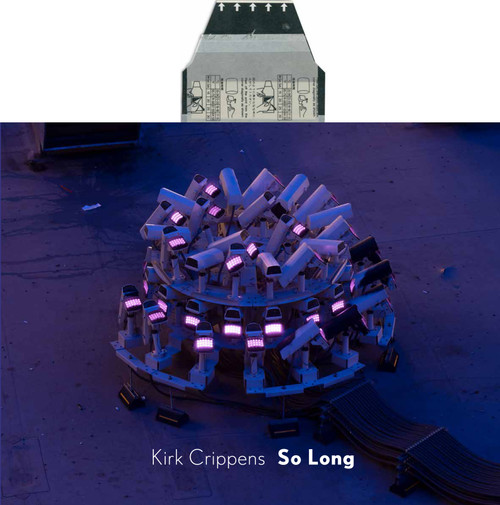 So Long is a meditation influenced by the pandemic, not purely about it. Kirk Crippens began creating photographs for this project on March 17, 2020, the day the San Francisco Bay Area, where he lives, went into quarantine. The last photograph was made on May 22, 2021; a lot had changed.

Crippens’s photography started as two projects but elegantly blend together: the formal color photographs, made with a medium format camera on a tripod and inspired by Swedish photographer Lars Tunbjørk’s Office series, document the serenity of empty offices, and black and white snapshots, taken with Polaroid 250 Land Camera and a peel-apart Fuji pack film, that had been preserved in the photographer’s refrigerator for years, capture the dynamic distress of the time.

The quiet and thoughtful photography in the book reveal the photographer’s patience and resonate with the social, cultural, and political world of 2020-2021. The photographs of a painted portrait of George Floyd, a Black Lives Matter poster and a mural honoring Amanda Gorman’s 2021 Presidential Inauguration poem place light on American racism. Dried oranges carefully placed on an office table by a worker who thought they would be out of the office for a few weeks but wound up not returning for months, represent businesses that are no longer robust. Empty seats, often restricted with forbidding tape, stand in for those who will never join us again. Vibrant messages on theater marquees and signs, like “Quarantine is Temporary/Wu Tang is Forever” provide us with a sense of hope, humor, and irony.


About the Author
Based in San Francisco, Kirk Crippens has been photographing since he was a child. Institutions and collections that hold his prints include the Museum of Fine Arts Houston, Texas; the Smithsonian Institution, Washington D.C.; and Crystal Bridges Museum of American Art, Bentonville, Arkansas. Crippens began exhibiting in the United States in 2008, and internationally in 2011. His work has been shown in the National Portrait Gallery, London; Stanford University, Palo Alto, California; the Datz Museum, Gwangju, South Korea; the National Portrait Gallery, Scotland; and Pingyao International Photography Festival, Pingyao, China, where he exhibited in 2012 and 2015, and began his curatorial career in 2016. His first book, Live Burls (made together with Gretchen LeMaistre), was published in 2017 by Schilt Publishing. His second one, Going South – Big Sur, was published in 2019 by Schilt Publishing. His photographs are represented in Europe by Schilt Gallery, Amsterdam.

So You Want to Publish a Magazine?

So you want to be a Knight?