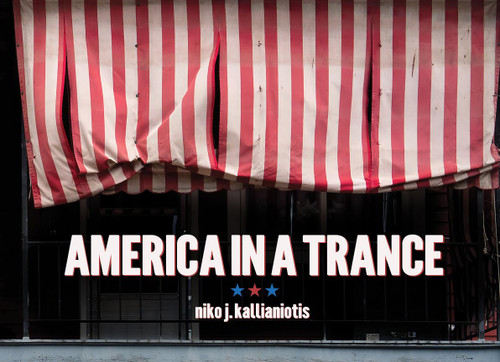 Niko J. Kallianiotis first monograph, America in a Trance dives into the heart and soul of the Pennsylvania industrial regions, where the notion of small town values exist and sustainable small businesses once thrived under the sheltered wings of American Industry. A mode to promote American values, industrialism provided a place where immigrants from tattered European countries crossed the Atlantic for a better future. The project isn¬ít just about the flushing out of industry and the towns suffering, but something more. Something as deep rooted as these values and traditions of hard work, family, faith, and an attitude of trying to make the best out of a little less as much of the world passes by or looks in with a skew. Kallianiotis, born and raised in Greece but seemingly Northeastern Pennsylvania bred, has called this place home for roughly twenty years. He believes in this place with a whole heart and it¬ís the element of the experience that drives his concept. Although the sway and beliefs from both sides of the fence in the current political climate have a direct effect and interest in these towns, Kallianiotis achieves a certain level of neutrality within the work. Whether it is the hard Pennsylvania coal towns to the East, the shadows of looming steel stacks to the West or every faded American dream in between. Through the use of light and color, an illumination of hope, the photographer explores his own relationship with the land. Within America in a Trance there is the silhouette of what once was, streets and storefronts thriving, and the echo of that time still ringing in the bricks of the houses and churches.

The Birds of America