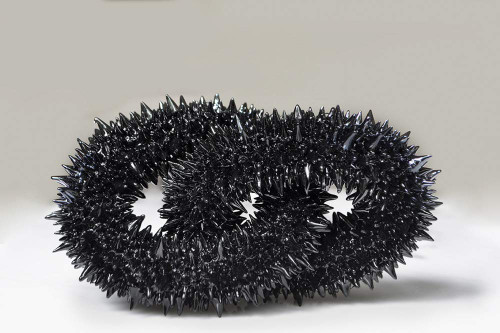 The book follows Wolski¬ís sustained engagement with the themes of organicity and the natural form.

Over the last three decades, Wolski has deployed a diversity of non-representational vocabularies¬óranging from geometric shapes inspired by early twentieth-century abstraction to Surrealist-inspired biomorphic forms¬óto investigate the idea of unification between the individual self and nature. While primarily a sculptor, Wolski is concerned with the question of materiality, which he often sees as a form of philosophical inquiry in and of itself.

Wolski¬ís practice often verges on the spiritual, although it maintains an active dialogue with the outside world. The artist¬ís career¬ówhich began in the 1980s¬óhas been historically aligned with the rapid deterioration of planet Earth and the depletion of its natural resources, thus turning the artist¬ís personal rumination on nature into an open manifestation of his environmental awareness. Through this resolutely inter-disciplinary body of work, Wolski continues to examine such wide-ranging and socially topical issues as the relationship between the individual and one¬ís habitat, the role of nature as a guardian of human history, and nature¬ís influence on artistic and philosophical expression in the modern era.