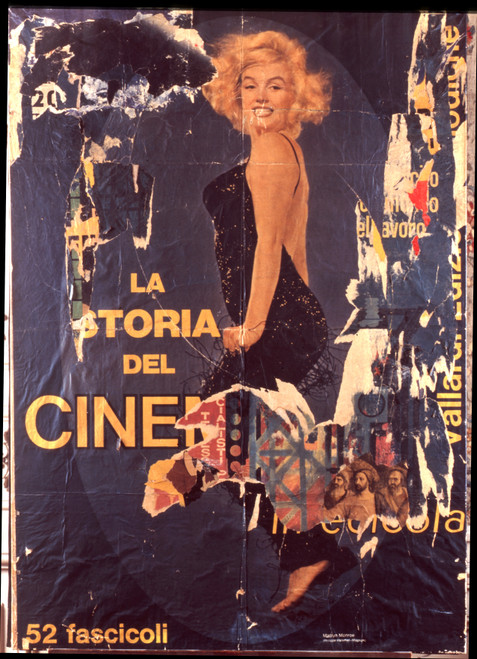 The second volume of a more extensive systematic cataloguing project of the artist¬ís body of work.

In this volume, the scholarly analysis and verification are carried out on works made between 1962 and 1973, when Rotella consolidated his d√©collage practice in its most graphic and pop aspects and began exploring photomechanical image reproduction techniques. He used photo emulsion on canvas and the artypo, up to defining a more automatic and immediate process in his effa√ßages and frottages. Across a chronological development, the Catalogue highlights the various stages that have distinguished his practice, thus allowing an inclusive and documented reading of this period.

Starting from advertising images regarding cinema or products of mass consumption, Rotella continued with his experiments on d√©collage, now no longer Informel but rather influenced by new icons of mass society. The works made in the early 1960s were shown at important international events attentive to the most innovative contemporary trends, including ¬ìNew Realists¬î (New York, Sidney Janis Gallery, 1962) and the 32. Venice Biennale in 1964. At both, Rotella¬ís works were compared to Pop Art, especially from the US, which draws upon an imagery more akin to the Italian artist¬ís.

His interest in the printing process also grew at this time: this gave life to his first photo emulsions on canvas ¬ñ obtained by projecting the selected image on primed canvas ¬ñ and then the artypos. The latter are large sheets of paper used to calibrate the printing machines and then normally discarded, of which Rotella appropriates to make artworks characterized by casual image overlappings. In line with the libertarian and licentious principles of the 1968 movement, the artist focused on glossy magazines for details, often laden with powerful eroticism, for his effa√ßages and frottages, resulting from the use of solvent on newspaper cut-outs.