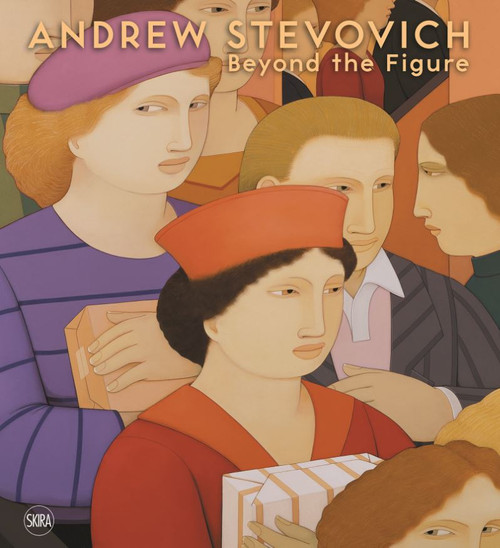 Andrew Stevovich is a deceptive painter. His figures flattened, his interest is focused on the line that defines them. He rarely concedes to conventional tools like shading to express volume. The figures¬íinner states seem equally reticent. The repetitiveness of their forms seem to be decorative intent. Their apparent stillness has the same effect. We think we have identified a vocabulary of form, and having done so, conclude that is at the heart of his work. And then we move on. But should we? Stevovich¬ís work is complex and layered. His figures give up their secrets slyly.

Deeply rooted in the European painting tradition, Stevovich uses all of the tools developed over the last several centuries to animate his subjects. He borrows deeply from Renaissance painting. He is attuned to the sensibility of the 19th century and to Americans, pre-and post-war. These are the building blocks of his visual vocabulary. However, he is not an artist of historical quotation. All of these influences pass through the lens of his disciplined restraint to remarkable effect. Layers of activity move toward the surface of his paintings and are captured in a kind of stop motion, it is what makes even his busiest paintings seem so silent. He has developed an extraordinary collection of tools to animate his work and the figures in it. But he never relinquishes his severe constraint of them. This contradiction is purposeful and is at the core of understanding his work.

Beyond the Figure examines 120 of the artist¬ís work painted over a period of 50 years. While it shows the full range of his development, it does so looking at the dominant themes and typologies of his work rather than charting it chronologically. Stevovich has created a world, but he is not a realist. While people are his subject, line, color and form are his enduring interests.

The Other Office 3: Creative Workplace Design

Truth, Love & Clean Cutlery: A New Way of Choosing Where to Eat in the World