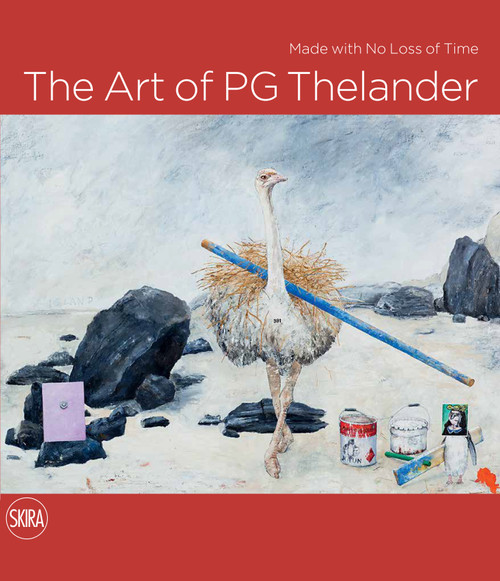 Stockholm-based artist PG Thelander (1936) is a unique figure in the contemporary art world. In the 1970s, his paintings, drawings and etchings seemed to spring directly from a sharp critical observation, which continuously gained new surprising aspects from nature and reality. In the following decade, against the rigid formalism and technical neatness of the Stockholm art scene he launched a new exhilarating freedom, a freedom allowing a reckless play with proportions of reality, filled with a mysterious figurative glow and fantastic distortions.

For over fifty years, the disaster of the conditio humana has lured behind his enigmatic figures, signs and scripts. His formal vocabulary is fluid, elusive and in a perennial state of transition, while the line between sarcastic realism and poetic symbolism remains blurred.

Over the last half century, artist P√§r Gunnar Thelander has produced a puzzling body of paintings, prints, sculptures, medals and paper works. He has created a new, enigmatic language of contemporary painting that is profoundly dramatic and closely tied to the inscrutable complexities of human existence. A pivotal theme in PG Thelander¬ís work is the incompatibility between what we see and the way we linguistically designate it. At an early point in his career, he developed a precise technique for creating concrete metaphoric images inspiring the titles of his works. The combination of image and title has never presented a unified meaning. Thelander¬ís language keeps the lines of communication to emotional interpretations open through the fact that, since the 1960s, each decade of his works has laboriously reconstructed the astonished ignorance with which we first see something ¬ñ that moment before we link up with what we actually see, so that it becomes dissolved in the abstracting purpose and constraints of our mastery of the everyday.

Show Time: The Most Influential Exhibitions of Contemporary Art

Taryn Simon: An Occupation of Loss