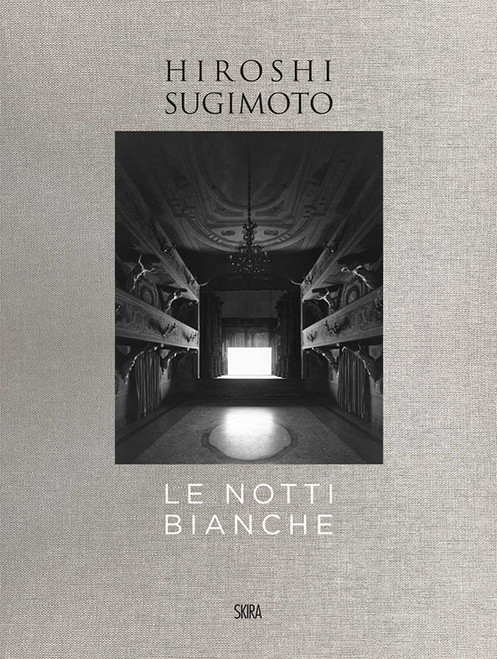 Le Notti Bianche brings together twenty images of Opera Houses, created by Hiroshi Sugimoto in Italy since 2014. The title that the artist chose is also the title of the film being projected during the shoot at the Teatro di Villa Aldrovandi Mazzacorati in Bologna and directed by Luchino Visconti in 1957 and starred Marcello Mastroianni and Maria Schell. The story was originally set in St. Petersburg during the endless summer nights, when it never gets truly dark and night falls slowly, and was moved to Livorno for Visconti¬ís version; with Sugimoto, Le Notti Bianche becomes a subtle metaphor with a range of meanings. The theatre screen with the vivid light emanating from it suggests the white of the photographic paper where the images come to life during the development process. Frame by frame on the screen in the darkness of the cinema, and detail after detail on the light sensitive sheet immersed in the chemical baths in the darkness of the darkroom, the story takes shape just as the picture slowly appears. The new collection of twenty works presented in the book was created entirely in Italy over the past three years, after a break of more than a decade in the production of Theaters. For the first time, in addition to the image of the front of the stage, the stalls and the gallery where the camera was set up are included. This is an additional step on the part of the Japanese photographer in his desire to let the audience participate in the work, beyond pure contemplation of it. The theatres photographed, chosen for their architectural characteristics as well as for their history, are the Teatro Carignano in Turin, the Teatro Farnese in Parma, the Teatro all¬íAntica in Sabbioneta, the Teatro Olimpico in Vicenza, the Teatro Comunale in Ferrara, the Teatro Scientifico in Mantua, the Teatro dei Rozzi in Siena, the Teatro Sociale in Bergamo, the Teatro Comunale Masini in Faenza, the Teatro Goldoni in Bagnacavallo, the Teatro dei Rinnovati in Siena and the Teatro di Villa Aldrovandi Mazzacorati in Bologna.