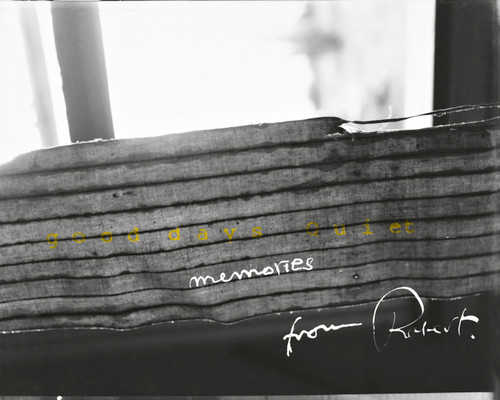 In this, Robert Frank¬ís newest book, he both acknowledges and moves beyond his acclaimed visual diaries (2010¬ñ17), which juxtapose iconic photos from throughout his career with the more personal pictures he makes today and suggestive, often autobiographical text fragments.

In Good Days Quiet Frank¬ís focus is life inside and outside his beloved weather-beaten wooden house in Mabou, where he has spent summers for decades with his wife June Leaf. Among portraits of Leaf, Allen Ginsberg and Frank¬ís son, are images of the house¬ís simple interior with its wood-fuelled iron stove, humble furniture and bare light bulbs, as well as views of the land and sea by the house: snow-covered, windswept, stormy or lit by the dying sun.

Frank¬ís Polaroids scanned for the book show various deliberate states of deterioration and manipulation at his hands, including texts that move from the merely descriptive (¬ìwatching the crows¬î) to the emotive (¬ìmemories,¬î ¬ìgrey sea¬óold house / can you hear the music¬î). As always in Frank¬ís books, his message lies primarily in the photos¬í lyrical sequence, an influential approach to the photobook pioneered by and today well at home in his 93-year-old hands.

Time and tide wait for no man. Rober t Frank