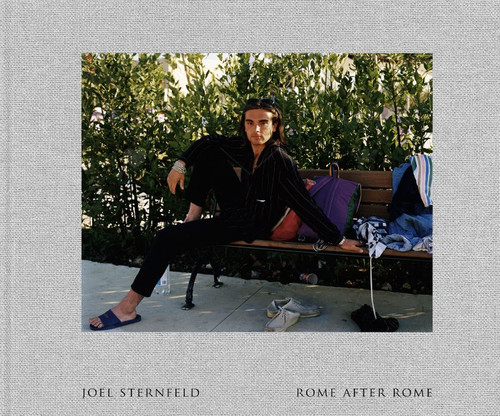 In his 1992 book Campagna Romana. The Countryside of Ancient Rome Joel Sternfeld focused on the ruins of grand structures with a clear warning: great civilizations fall, ours may too. Now in Rome after Rome, containing images from the previous book as well as numerous unpublished pictures, Sternfeld¬ís questions multiply: who are these modern Romans? What is their relationship to the splendor that was? What is the nature of sullied modernity in relation to the Arcadian ideal? Is there, at this late moment, any chance for Utopia? The Campagna, the countryside south and east of Rome occupies a special place in Roman¬óand human history. With the rise of Ancient Rome, this once polluted, malarial landscape was restored by emperors and thrived with some 20 towns and numerous wealthy villas on the rolling plains among the mighty aqueducts that fed water to Rome. After the city fell, the Campagna once again became desolate and dangerous. The gloomy tombs, broken homes and aqueducts sat in a kind of no man¬ís land for over 1,000 years. To this landscape came the painters: D√ºrer, Lorrain, Poussin, and later, Corot, Turner, and Americans such as Thomas Cole. In the ruins they sought the origins of Rome¬ís greatness and the meaning of her fall. Later they depicted a place where Roman gods cavorted and mankind lived in a golden age, an Arcadia. Central Rome was rebuilt with Baroque apartments hiding the past: in the Campagna the past was visible and all imaginings possible. Sternfeld juxtaposes the ruins of a powerful, ancient civilization with the new construction and the debris of our own time. Avoiding obvious contrasts, eschewing heavy-handed irony, this contemporary artist draws our attention to both despoliation and lasting beauty; he suggests many reasons for despair, yet he also has something to say about the nobility of the human spirit. Theodore E. Stebbins Jr.

The Story of Greece and Rome