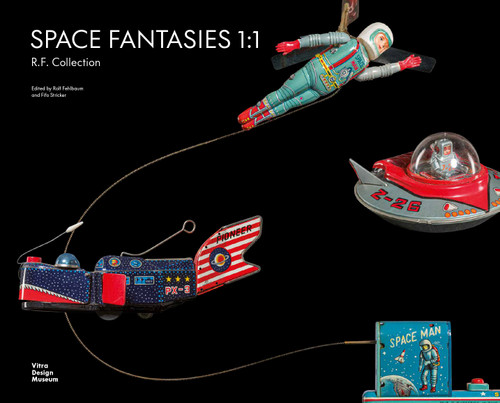 Presented in this oversize publication are 146 aerospace-related toys from the collection of Rolf Fehlbaum, Vitra¬ís chairman emeritus and the founder of Vitra Design Museum. Toys related to space exploration¬órockets, robots and astronaut figurines¬óexploded in popularity in the 1930s with the success of space opera comic strips such as Buck Rogers and Flash Gordon, which portrayed postwar fantasies of untold technological possibilities. From there, sci-fi only gained a wider audience as the Soviet/American space race began and people of all ages turned their gazes skywards to wonder about what marvels may exist beyond Earth¬ís orbit.

The toys in this volume are shown at their original size with the available packaging, organised into ten categories and arranged in chronological order by their manufacture dates. Some of the toys depict amusing conjectures for the future of aeronautical exploration such as space dogs, space elephants and even a space whale, while others are more realistic replicas of rockets in miniature. Infused with an undeniable nostalgia, this collection maintains the childlike wonder of the toys¬í initial audiences and invites present-day readers to both reflect on the era¬ís technological advancements and look to the future for what discoveries may still be on the horizon.

Traffic Space is Public Space: A Handbook for Transformation