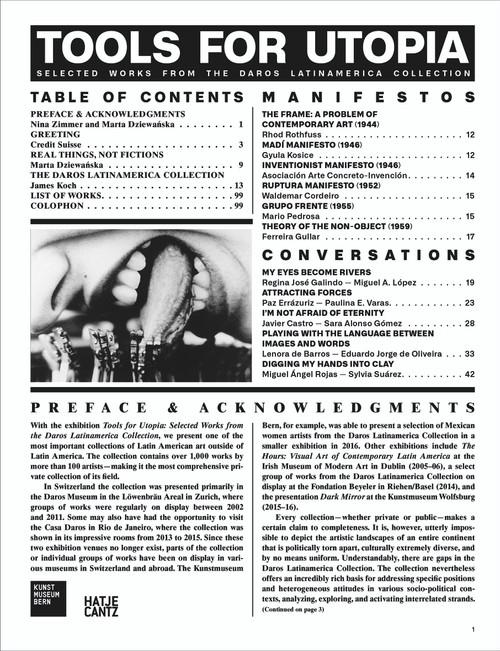 Tools for Utopia: Selected works from the Daros Latinamerica Collection is an exhibition of works from the 1950s to the late 1970s by artists from Brazil, Venezuela, Uruguay, and Argentina: Gego, H√©lio Oiticica, Carlos Cruz-Diez, Jes√∫s Rafael Soto, Mira Schendel, Liliana Porter, Julio Le Parc, and Ana Mendieta. Created when many Latin American countries were in conflict and ruled by dictators, these works¬óConcrete, Neo-Concrete, Conceptual¬ówere means of transgression. They were not only created as reactions but as artistic counter-proposals to totalitarian systems: signs of genuine engagement and experiments that included ingredients of social and political utopia. The exhibition and the accompanying publication are conceived as ¬ìtools,¬î referring to the efforts of the artists to transcend representation and become active agents for societal transformation. By displaying historical alongside contemporary work, and y presenting historical manifestos alongside recent conversations with the artists, the project examines the ways in which the urge to ¬ìactively inhabit the present¬î is continued, further complicated, and questioned by artists of the following generations. Tools for Utopia asks to what extent such Latin American art movements acted as catalysts for the cultural, social, and political imagination. What do these ideas and hopes stand for today? The exhibition and catalogue expound bold visions of art, politics, and subjectivity that are particularly relevant for today¬ís tensions in Latin America and beyond.

Miniatures (Bilingual edition): from the Time of Napoleon in the Tansey Collection