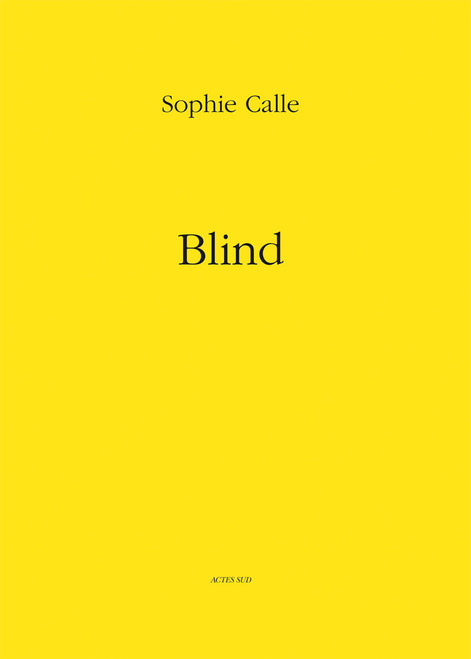 No stranger to the art of staging and to the act of disclosure, Sophie Calle returns again here to the theme of autobiography and to the notion of ‘the Other’, revealing in all their difference and singularity those who have been blind since birth or who have gone blind following an accident.

By establishing a dialectic between the testimonies of several generations of blind people and the photographs taken by her on the basis on these accounts, Sophie Calle offers readers a reflection on absence, on the loss of one sense and the compensation of another, on the notion of the visible and the invisible.

In this publication, she revisits three earlier works constructed and conceived around the idea of blindness, setting up a dialogue between them; in Les Aveugles (‘The Blind’), created in 1986, she questioned blind people on their representation of beauty; in 1991, in La Couleur aveugle (‘Blind Colour’), she asked non-sighted people what they perceived and compared their descriptions to artists’ musings on the monochrome; La Dernière Image (‘The Last Image’), produced in 2010 in Istanbul, historically dubbed the 'city of the blind', gives a voice to men and women who have lost their sight, questioning them on the last image they can remember, their last memory of the visible world.

The work, which is structured as a triptych, uncovers sensibilities, perceptions and events that are painful, sincere. Sophie Calle’s idea is to underline the permanence and irony of a particular situation, with the aim of redeeming and highlighting the importance of sight.

BlindFold: A Brain-Bending Game of Scribbles and Sabotage

Yo! The early days of Hip Hop 1982-84: Photography by Sophie Bramly