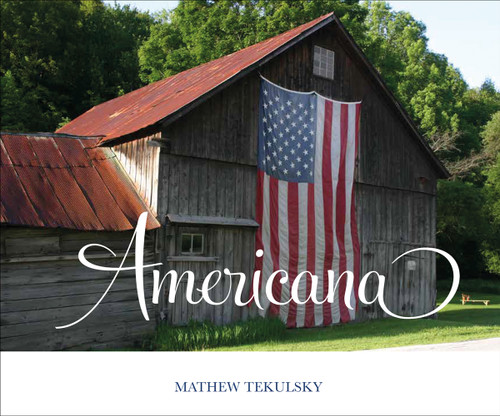 From sea to shining sea, from Yankee Stadium to Yosemite National Park, Mathew Tekulsky turns his lens and commentary on the greatest topic of them all, the United States of America, in his new book Americana: A Photographic Journey. Following on the heels of his successful book Galapagos Birds: A Photographic Voyage, Mr. Tekulsky's take on the American landscape includes images such as a barn with an American flag draped along its side; John Lennon's Imagine mosaic in New York City's Central Park; covered bridges and antique automobiles; an inflatable Uncle Sam in a front yard festooned with red, white, and blue buntings; John Burroughs' Slabsides cabin; Mariano Rivera pitching a save at Yankee Stadium; a classic Vermont diner; a roller coaster at twilight; the Beverly Hills Hotel; tourists at Tunnel View in Yosemite National Park; and surfboards in Hawaii. And there's much, much more in this book. We live in an era of photographic images, and Mr. Tekulsky has provided the reader with 83 of the best photographs of America that you will ever see. According to Wikipedia, Americana is defined as "any collection of materials and things concerning or characteristic of the United States or of the American people and is representative or even stereotypical of American culture as a whole." As such, Mathew Tekulsky's book Americana: A Photographic Journey is a piece of Americana itself.