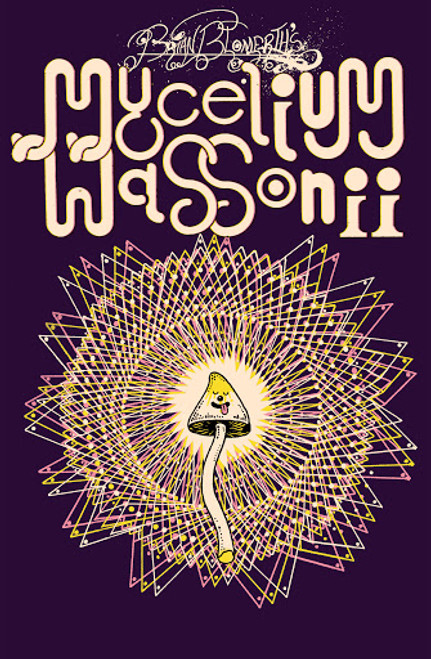 Brian Blomerth first fused his singularly irreverent underground comix style with heavily-researched history in 2019’s Brian Blomerth’s Bicycle Day, a Technicolor retelling of the discovery of LSD. Now, the illustrator and graphic novelist continues his wild and woolly excursions into the history of mind expansion with Mycelium Wassonii, an account of the lives and trips of R. Gordon and Valentina Wasson, the pioneering scientist couple responsible for popularizing the use of psychedelic mushrooms. A globetrotting vision of hallucinatory science and religious mysticism with appearances by Life Magazine, the CIA, and the Buddha, Mycelium Wassonii is a visual history and a love story as only Blomerth’s Isograph pen can render it.


About the Author
Brian Blomerth is an illustrator, cartoonist and musician based in Brooklyn. His previous publications—released via Anthology Editions, Tan & Loose, and through his own Pupsintrouble Press—include the zines Xak’s Wax, iPhone 64: A User’s Guide, and Hypermaze. A veteran of the underground music and arts scene whose work has graced numerous album covers, Blomerth released his first full-length book, the acclaimed visual history Brian Blomerth’s Bicycle Day, in 2019.

Paul Stamets is a mycologist, author, speaker, entrepreneur, and leading voice in mushroom advocacy. His lectures and presentations have helped deepen the worldwide conversation around medicinal fungi, and his original research has led to discoveries in sustainability and immune enhancement. The author of six books (most recently Fantastic Fungi: How Mushrooms Can Heal, Shift Consciousness & Save the Planet), Stamets has discovered and named numerous new species of psilocybin mushrooms and is the founder and owner of Fungi Perfecti, LLC.

Dream Lovers: John and Yoko in NYC: The Photographs of Brian Hamill