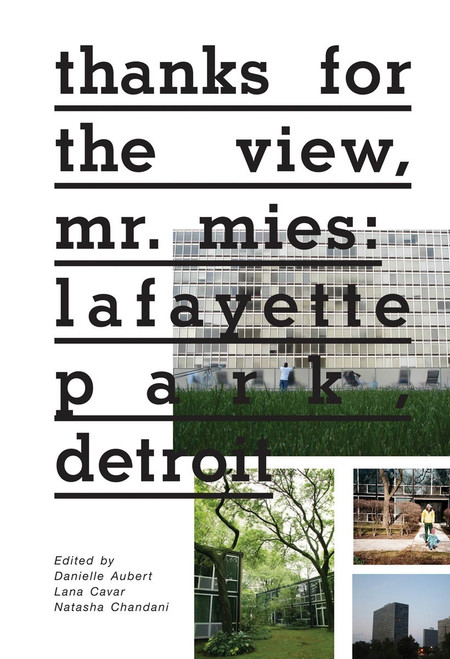 Lafayette Park, a middle-class residential area in downtown Detroit, is home to the largest collection of buildings designed by Ludwig Mies van der Rohe in the world. Throughout the 1990s and 2000s, it remained one of Detroit's most racially integrated and economically stable neighbourhoods, although it was surrounded by evidence of a city in financial distress. Through interviews with and essays by residents, reproductions of archival material: new photographs by Karin Jobst, Vasco Roma and Corine Vermeulen, and previously unpublished photographs by documentary filmmaker Janine Debann√©, Thanks for the View, Mr. Mies examines the way that Lafayette Park residents confront and interact with this unique modernist environment.

This book is a reaction against the way that iconic modernist architecture is often represented. Whereas other writers may focus on the design intentions of the architect, authors Aubert, Cavar and Chandani seek to show the organic and idiosyncratic ways in which the people who live in Lafayette Park actually use the architecture and how this experience, in turn, affects their everyday lives.

Thanks for the View, Mr. Mies was originally published in 2012, two years before the city of Detroit entered into the largest municipal bankruptcy in the country. The 2019 edition of Thanks for the View, Mr. Mies includes a revised introduction and two new texts by Lafayette Park residents, and authors, Marsha Music and Matthew Piper. Music and Piper reflect on the changes the neighbourhood underwent between 2012 and 2018, when the city went through and emerged from bankruptcy and entered into a new phase, as a desirable place for real estate investment.

My Garden is a Car Park: and other Design Dilemmas