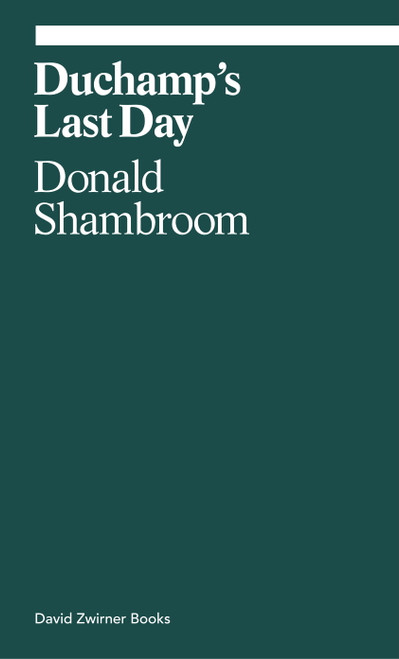 Just moments after Duchamp died, his closest friend Man Ray took a photograph of him. His face is wan; his eyes are closed; he appears calm. Taking this image as a point of departure, Donald Shambroom begins to examine the surrounding context¬óthe dinner with Man Ray and another friend, Robert Lebel, the night Duchamp died, the conversations about his own death at that dinner and elsewhere, and the larger question of whether this radical artist¬ís death can be read as an extension of his work.

Shambroom¬ís in-depth research into this final night, and his analysis of the photograph, feeds into larger questions about the very nature of artworks and authorship which Duchamp raised in his lifetime. In the case of this mysterious and once long-lost photograph, who is the author? Man Ray or Duchamp? Is it an artwork or merely a record? Has the artist himself turned into one of his own readymades?

A fascinating essay that is both intimate and steeped in art history, Duchamp¬ís Last Day is filled with intricate details from decades of research into this peculiar encounter between art, life, and death. Shambroom¬ís book is a wonderful study of one of the greatest artists of the twentieth century.

Last of Their Kind