Giotto and His Works in Padua 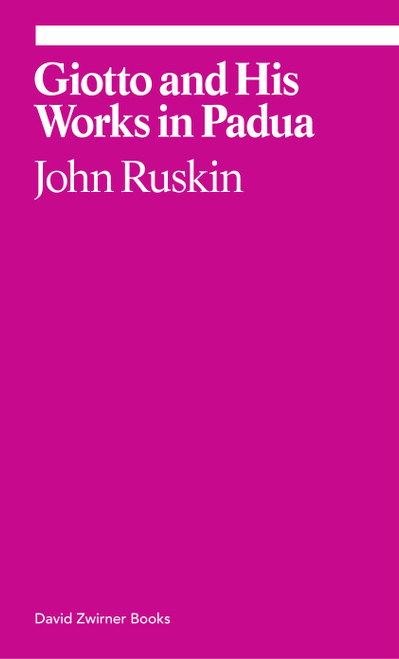 Giotto and His Works in Padua

The Arena Chapel in Padua was completed in 1303; Giotto, then considered the preeminent painter in Italy, was commissioned to paint it in 1306. The resulting fresco cycle, detailing the history, birth, life, and death of Christ, ranks among the greatest artworks ever created. John Ruskin helped redefine art criticism in the nineteenth century through his attention to detail, his playful and engaging prose, and the conviction with which he discussed the subjects that mattered most to him. Ruskin¬ís ekphrastic writing became a way for readers to approach the experience of looking at great art without actually seeing it in person. Despite having written about Giotto on numerous occasions in Stones of Venice and Modern Painters, he never treated the Arena Chapel in its own right. Here Ruskin examines the panels and brings them life, describing their many hidden details, all the result of Giotto¬ís unrivaled genius. As Ruskin says, ¬ìGiotto was¬Öone of the greatest men who ever lived.¬î Long out of print, the Arundel Society first published Giotto and His Works in Padua between 1853 and 1860. It stands as Ruskin¬ís most compelling set of reflections on Giotto¬ís masterpiece¬óan artwork that, in Ruskin¬ís estimation, changed the very course of art history. Originally accompanied by a set of black and white woodcuts of the panels in the Chapel, this new edition presents each panel in vivid color photography, adding a useful visual aid to Ruskin¬ís lyrical descriptions. The result is a book that serves not only as an introduction for students of art history, but also as a discussion of what it means to be a great artist, by one of most influential writers ever to tackle visual art.

The Last Painting: Final Works of the Great Masters: from Giotto to Twombly

Ibsen's Kingdom: The Man and His Works

Guillermo del Toro: The Iconic Filmmaker and his Work