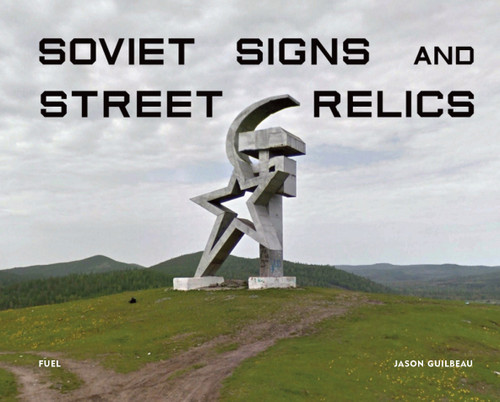 French photographer Jason Guilbeau has used Google Street View to virtually navigate Russia and the former USSR, searching for examples of a forgotten Soviet empire. The subjects of these unlikely photographs are incidental to the purpose of Google Street View ¬ñ captured by serendipity, rather than design, they are accorded a common vernacular. Once found, he strips the images of their practical use by removing the navigational markers, transforming them to his own vision.

From remote rural roadsides to densely populated cities, the photographs reveal traces of history in plain sight: a Brutalist hammer and sickle stands in a remote field; a jet fighter is anchored to the ground by its concrete exhaust plume; a skeletal tractor sits on a cast-iron platform; an village sign resembles a Constructivist sculpture. Passers by seem oblivious to these objects. Relinquished by the present they have become part of the composition of everyday life, too distant in time and too ubiquitous in nature to be recorded by anything other than an indiscriminate automaton.

This collection of photographs portrays a surreal reality: it is a document of a vanishing era, captured by an omniscient technology that is continually deleting and replenishing itself ¬ñ an inadvertent definition of Russia today.