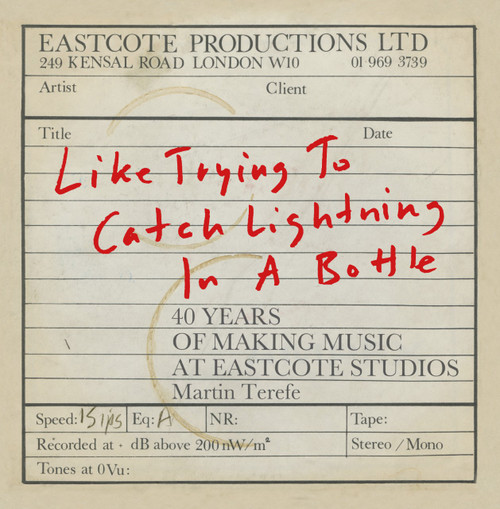 In 1980 a young musician and engineer, recently graduated from Cambridge with a degree in architecture, decided to start a music studio. That person was Philip Bagenal and the studio he started was Eastcote Studios.

Situated north of Ladbroke Grove, Eastcote would go on to become one of the most important and influential of London music studios. It is where Massive Attack recorded their seminal first album, Blue Lines, where Neneh Cherry recorded as well as Tricky and Seal in the 1980s and early 90s, and where Mute Records recorded many of their artists, including Depeche Mode. Then in the late 90s it became a central part of the brit pop scene with Placebo, Elastica and Suede and more recently where a new generation of musicians, from Adele to the Arctic Monkeys, the Kaiser Chiefs to Mumford & Sons, created some of their greatest albums.

But this book tells the story of so much more: of why it became so successful, about the bands you may never have heard of, the sessions that collapsed into chaos and the triumphs on the other side. And about the anti-authoritarian sound magician that was Philip Bagenal.


About the Author
Martin Terefe is an acclaimed music producer, musician and songwriter as well as the founder of Kensaltown Recording Studios. Originally from Sweden he moved to London in the 1990s to work in the music industry. In the 25 years since then, Martin has produced Grammy, Brit and Juno award-winning albums, and worked with artists like James Morrison, Cat Stevens and KT Tunstall. His productions of I’m Yours (Jason Mraz), Hey Soul Sister (Train) and I Took A Pill in Ibiza (Mike Posner) are part of modern American chart history, and his work with developing and working with the next generation continues with artists such as Shawn Mendes, Alec Benjamin and Yungblud. He is also a founding member of the multi-disciplinary art collective Apparatjik. In 2016 he acquired Eastcote Studios from the founder, Philip Bagenal. This is his first book.

The Pasta Man: The Art of Making Spectacular Pasta - with 40 Recipes

The Denim Manual: A Complete Visual Guide for the Denim Industry

Creative Demons and How to Slay Them