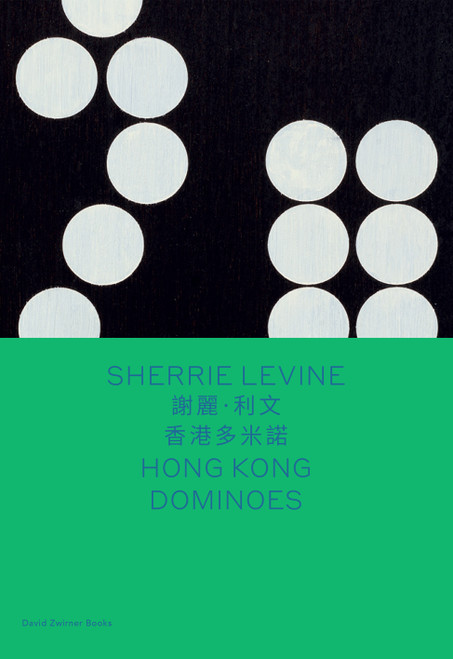 Exploring the development of groundbreaking artist Sherrie Levine’s work, this catalogue looks at four series central to her practice.

The latest in the Spotlight Series, which focuses on new bodies of work by contemporary artists, Sherrie Levine: Hong Kong Dominoes showcases several series that distinctly engage the artist’s ongoing inquiry into notions of authorship, originality, and authenticity.

Many of the works are consistent with Levine’s practice—the deliberate reproduction of other artists’ works and styles, so that her work and the original are nearly indistinguishable (as with the After Henri Matisse (1985) and After Feininger (2021) series). A number of the works make reference to modernist masterpieces, questioning the stereotypical construct of the heroic male artist. In her Monochromes After Renoir Nudes (2016) series, Levine used a computer program to calculate the average tone of the nude figures in Renoir’s paintings and then used this color to create monochrome panels. Published for the first time, Hong Kong Dominoes: 1–12 (2017) replicates the patterns of a set of dominoes that Levine purchased in Hong Kong, evoking both minimalist art and popular games.

The catalogue also features a new essay by Larry List, which tracks the history of Levine’s inspirations and artistic practice, and an interview with Levine by Jeanne Siegel, originally published in the June/ Summer 1985 issue of Arts Magazine, which explores the artist’s use of appropriated imagery.

Sherrie Levine’s (b. 1947) work engages many of the core tenets of postmodern art, incisively challenging notions of originality, authenticity, and identity. Since the late 1970s, she has created a singular and complex oeuvre using a variety of media, including photography, painting, and sculpture. Many of her works are explicitly appropriated from artworks within the modernist canon, while others are more general in their references, assimilating art historical interests and concerns rather than specific objects. Some of Levine’s earliest work was included in Pictures, an important exhibition at Artists Space in New York in 1977 curated by Douglas Crimp that came to define The Pictures Generation—a group of artists examining the structures of signification underlying any image.

Larry List is a New York-based writer and curator. He is a contributor to the Man Ray catalogue raisonné, and his essays have appeared in a range of publications, including Duchamp/Man Ray/Picabia (2008), Transformer: The Work of Glenn Kaino (2009), Takako Saito: Dreams to Do (2019), and Jan Fabre: Oro Rosso (2019). His curatorial projects include The Imagery of Chess Revisited, Skin Trade, John Cage & Glenn Kaino: Pieces & Performances, Xanti Schawinsky: Beyond the Bauhaus, Found Language, and Man Ray & Sherrie Levine: A Dialogue Through Objects, Images & Ideas.

Jeanne Siegel was an influential writer, art critic, curator, and educator. She edited and contributed to numerous art journals and was the author of Artwords: Discourse on the 60s and 70s (1985), Art Talk: The Early 80s (1990), and Painting After Pollock: Structures of Influence (1999). She served as the chair of the art history department at the School of Visual Arts, New York, from 1975 to 2000 and as the chair of the undergraduate fine arts department from 1976 to 2005. Siegel passed away in 2013.

Once Upon a Hong Kong (Bilingual edition)