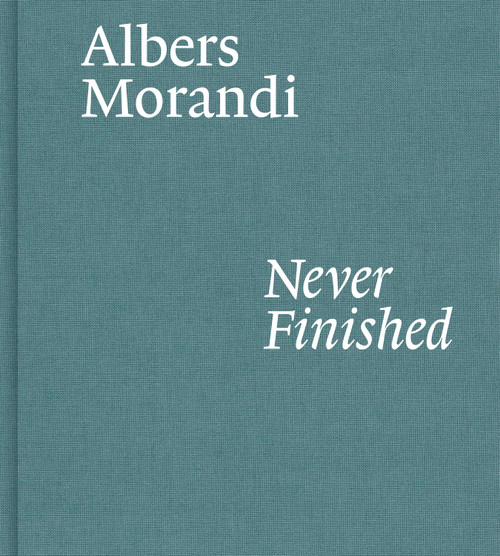 An unprecedented catalogue exploring the affinities and contrasts between Josef Albers and Giorgio Morandi—two of modern art’s greatest painters.

"Rarely seen together, the artwork of Josef Albers (1888–1976) and Giorgio Morandi (1890–1964) shares many similarities. Although they never met, both artists worked in series as they explored difference and potential through their distinctive treatment of color, shape, form, and morphology. They were also both influenced by Cezanne. As master illusionists and experts in proportion, they tackle similar conceits from different perspectives. Albers focused on the effects of subtle or bold changes and interactions in color, while Morandi made still lifes that treat simple objects as a cast of characters on a stage, exploring their relationship in space.

Published on the occasion of the critically acclaimed exhibition Albers and Morandi: Never Finished, the book illuminates the visual conversation between these two artists. With the exhibition hailed by The New Yorker’s Peter Schjeldahl as “one of the best … I’ve ever seen,” this publication brings this unusual, thought-provoking pairing to your home. Gorgeous reproductions are accompanied by a roundtable about form and color between the exhibition’s curator, David Leiber; Heinz Liesbrock, the director of the Josef Albers Museum Quadrat Bottrop, Germany; and Nicholas Fox Weber, the director of Josef and Anni Albers Foundation, as well as an essay by the Morandi expert and founder of the Center for Italian Modern Art, Laura Mattioli.


About the Author
Josef Albers (1888–1976) is considered one of the most influential abstract painters of the twentieth century, as well as an important designer and educator. Albers was born in Bottrop, Germany, and studied briefly at the Königliche Bayerische Akademie der Bildenden Kunst, Munich, in 1919 before becoming a student at the Weimar Bauhaus in 1920. In 1933, he and Anni Albers emigrated to North Carolina, where they founded the art department at Black Mountain College.

Giorgio Morandi was born in 1890 in Bologna, Italy, where he lived until his death in 1964. From 1907 to 1913, he was enrolled at the Bologna Accademia di Belle Arti, where he later served as the professor of engraving and etching from 1930 until 1956. By 1920, Morandi established the small-scale depictions of still lifes and landscapes that he would pursue throughout his oeuvre, and that were associated with no other school or style but his own.