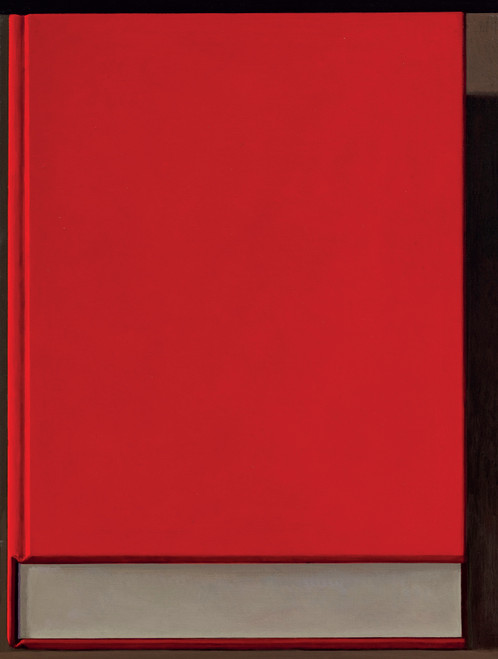 The Chinese artist Liu Ye’s meticulous, colorful canvases convey his love of literature in the first publication dedicated to his paintings of books.

The Beijing-based artist Liu Ye is known for his precise, deftly rendered representational paintings. Drawn equally from contemporary culture and old master painting, Liu’s wide-ranging visual touchstones include Piet Mondrian, Miffy the Bunny, and Prada advertisements. In this new publication devoted to his book paintings, the artist examines the book as both a physical object and cultural totem. Playing with geometry and perspective, Liu creates extraordinary and disorienting portraits of this most familiar subject.

Liu’s Book Painting series, begun in 2013, depicts close-up views of books that are turned open to reveal empty pages, an approach that emphasizes the object’s form over its content. Rendering books’ material structure—endpapers, binding, spine—in sensual detail, these paintings indicate an obsession with the book as an object and a lifelong love of literature. Liu’s father was a children’s book author who introduced him to Western writers at a young age, fueling his curiosity and imagination. Many of the books in Liu’s father’s collection were banned in Cultural Revolution–era China and the artist read them secretly throughout his childhood. This formative experience figures in his popular Banned Books series and in his book paintings in general.

Published on the occasion of a solo exhibition presented at David Zwirner, New York, in 2020, this catalogue includes new writing by the acclaimed poet Zhu Zhu, who traces the evolution of the book form in Liu’s work, as well as an interview with the artist by Hans Ulrich Obrist.


About the Author
Beijing-born painter Liu Ye (b. 1964) combines abstraction and figuration to create bold, meditative paintings that investigate the intersections of history and representation through a distinct vocabulary that transcends traditional Eastern and Western art-historical categories. Drawing on both his childhood memories of China and his early education in Europe, the artist’s carefully balanced, methodical compositions play on perspective and ways of seeing, while also referencing a diverse range of aesthetic, literary, and cultural sources. Among these are the fairy-tale worlds of Hans Christian Andersen and Lewis Carroll; literature by Leo Tolstoy and Vladimir Nabokov; and modernist painting, architecture, and design, from Balthus to the Bauhaus. These various points of reference have inspired Liu’s artistic output for more than twenty-five years, resulting in a body of work that is at once rich in its historical quotations and singularly his own.

Zhu Zhu is a poet, curator, and art critic. Born in 1969, he is the author of various collections of poetry, prose, and art criticism, including Blue Smoke (2004) and The Great Wall (2018). He is the recipient of the Anne Kao Poetry Prize and the China Contemporary Art Awards Review Award.

Hans Ulrich Obrist (b. 1968, Zurich, Switzerland) is Artistic Director of the Serpentine Galleries in London. Prior to this, he was the Curator of the Musée d’Art Moderne de la Ville de Paris. Since his first show “World Soup” (The Kitchen Show) in 1991, he has curated more than 300 shows. Obrist’s recent publications include Ways of Curating (2015), The Age of Earthquakes (2015), Lives of the Artists, Lives of Architects (2015), Mondialité (2017), Somewhere Totally Else (2018) and The Athens Dialogues (2018).

Books Do Furnish a Painting

My Museum by Joanne Liu