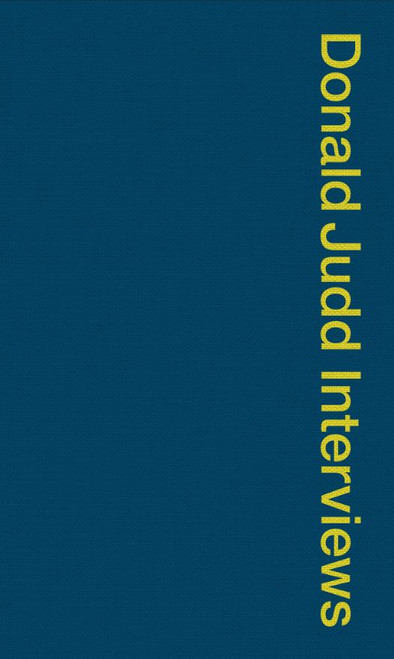 Donald Judd Interviews presents more than sixty interviews with the artist over the course of four decades, and is the first compilation of its kind. It is the companion volume to the critically acclaimed and bestselling Donald Judd Writings.

This collection of interviews engages a diverse range of topics, from philosophy and politics to Judd¬ís insightful critiques of his own work and the work of others such as Mark di Suvero, Edward Hopper, Yayoi Kusama, Barnett Newman, and Jackson Pollock. The opening discussion of the volume between Judd, Dan Flavin, and Frank Stella provides the foundation for many of the succeeding conversations, focusing on the nature and material conditions of the new art developing in the 1960s. The publication also gathers a substantial body of unpublished material across a range of mediums including extensive interviews with art historians Lucy R. Lippard and Barbara Rose.

Judd¬ís contributions in interviews, panels, and extemporaneous conversations are marked by his forthright manner and rigorous thinking, whether in dialogue with art critics, art historians, or his contemporaries. In one of the last interviews, he was asked, ¬ìWhat kind of advice do you have for young artists and architects based on all the things you thought all these years?¬î Judd responded, ¬ìTo remember that art and architecture are both real activities with their own integrity and that they are not basically commercial activities and you have to partly live with that. Certainly, it¬ís not hard to maintain the difference ... I think both activities, to repeat myself, have an integrity. They are each a particular activity, and if you don¬ít like that activity, don¬ít do it. Go do something else. If you really want to make a lot of money, go sell cars or something.¬î

The Cat Purrsonality Test: What Our Feline Friends Are Really Thinking