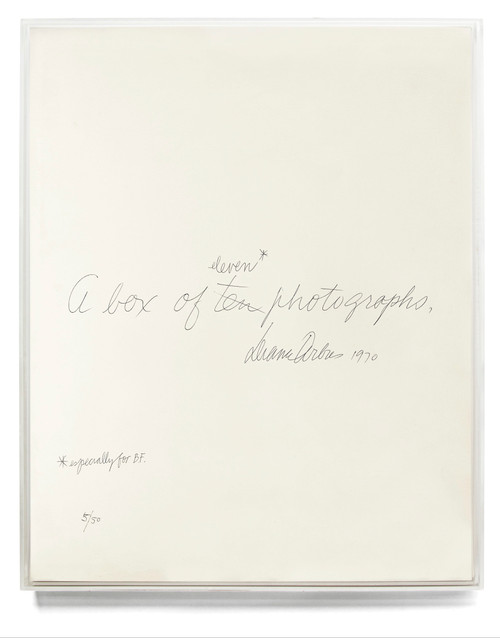 In May 1971, Artforum , bastion of late modernism, featured the work of a photographer for the very first time. On its cover and in a six-page spread, it announced the publication of a portfolio, A box of ten photographs , by Diane Arbus. In the words of the magazine¬ís editor, Philip Leider, ¬ìThe portfolio changed everything . . . one could no longer deny [photography¬ís] status as art.¬î At the time of Arbus¬ís death, two months later, only four of the intended edition of fifty had been sold. Two had been purchased by Richard Avedon (the first for himself, the second as a gift for his friend Mike Nichols); another was purchased by Jasper Johns; and a fourth by Bea Feitler, art director at Harper¬ís Bazaar . Arbus signed the prints in all four sets; each print was accompanied by an interleaving vellum slip-sheet inscribed with an extended caption. For Feitler, Arbus added an eleventh photograph, A woman with her baby monkey, N.J. , 1971. Acquired by the Smithsonian American Art Museum, Washington, D.C., in 1986¬óand the only one of the four completed and sold by Arbus that is publicly held¬óthat portfolio is the subject of an exhibition on view at the museum from April through September 2018. This exceptional book replicates the nature of Diane Arbus¬ís original and now legendary object. Smithsonian curator John P. Jacob, who has unearthed a trove of new information in preparing the book and exhibition, weaves a fascinating tale of the creation, production, and continuing repercussions of this seminal work.