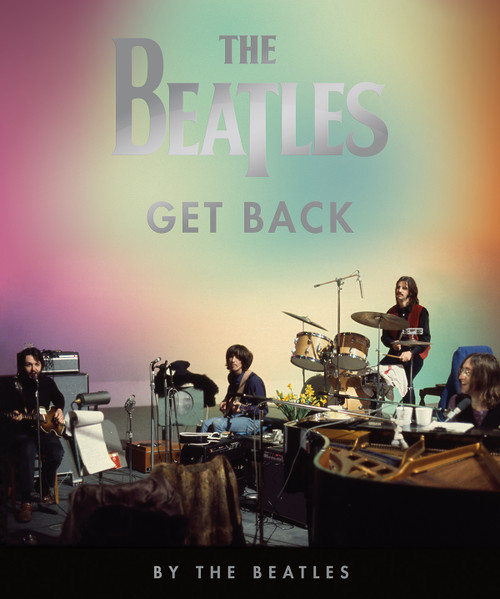 The book opens in January 1969, the beginning of The Beatles’ last year as a band. The Beatles (The White Album) is at number one in the charts and the foursome gather in London for a new project. Over 21 days, first at Twickenham Film Studios and then at their own brand/new Apple Studios, with cameras and tape recorders documenting every day’s work and conversations, the band rehearse a huge number of songs, culminating in their final concert, which famously takes place on the rooftop of their own office building, bringing central London to a halt.

The Beatles: Get Back tells the story of those sessions through transcripts of the band’s candid conversations. Drawing on over 120 hours of sound recordings, leading music writer John Harris edits the richly captivating text to give us a fly/on/the/wall experience of being there in the studios. These sessions come vividly to life through hundreds of unpublished, extraordinary images by two photographers who had special access to their sessions—Ethan A. Russell and Linda Eastman (who married Paul McCartney two months later). Also included are many unseen high/resolution film/frames, selected from the 55 hours of restored footage from which Peter Jackson’s documentary is also drawn.

Legend has it that these sessions were a grim time for a band falling apart. However, as acclaimed novelist Hanif Kureishi writes in his introduction, “In fact this was a productive time for them, when they created some of their best work. And it is here that we have the privilege of witnessing their early drafts, the mistakes, the drift and digressions, the boredom, the excitement, joyous jamming and sudden breakthroughs that led to the work we now know and admire." Half a century after their final performance, this book completes the story of the creative genius, timeless music, and inspiring legacy of The Beatles.

"It would be fair to say that today Let It Be symbolizes the breaking/up of The Beatles. That’s the mythology, the truth is somewhat different. The real story of Let It Be has been locked in the vaults of Apple Corps for the last 50 years.” — Peter Jackson

About the Author
The Beatles are the bestselling music act of all time. Between 1962 and 1970 John Lennon, Paul McCartney, George Harrison and Ringo Starr released thirteen albums as a band, made five films together, and topped the charts all over the world. Until 1966 they toured the world to unprecedented mass acclaim, inspiring the phenomenon of Beatlemania. Their creativity stretched the possibilities of popular music and — working with their producer George Martin — they revolutionized studio recording processes. They had an unrivalled impact on the music industry, fashion, popular culture and society in the 1960s and beyond, and their influence persists today.

Peter Jackson is an Academy Award winning director, producer and screenwriter. His films include The Lord of the Rings and The Hobbit trilogies as well as the BAFTA nominated World War One documentary They Shall Not Grow Old. In 2018 he began work on a new documentary about The Beatles' 1969 Let It Be sessions, making use of the 55 hours of footage that have never been seen.

Hanif Kureishi is the author of The Buddha of Suburbia, which won the Whitbread Prize for Best First Novel, The Black Album, Intimacy, The Last Word, The Nothing, and What Happened? His screenplay for My Beautiful Laundrette received an Oscar nomination for Best Screenplay. Kureishi has been awarded the Chevalier de l’Ordre des Arts et des Lettres, the PEN Pinter Prize, and is a Commander of the Order of the British Empire. His work has been translated into thirty/six languages.

John Harris writes for The Guardian and Mojo magazine. His books include The Last Party, about the culture of the 1990s, and the definitive account of Pink Floyd’s The Dark Side Of The Moon. In 2018, he contributed an essay to the 50th anniversary edition of The Beatles’ White Album.

Ethan A. Russell is a multiple Grammy®/nominated photographer, director and author of four books. He is the only photographer to have shot covers for The Beatles, The Rolling Stones and The Who. He was invited by The Beatles to photograph the band’s recording sessions in January 1969 and his images adorn the sleeve of the Let It Be album.

Linda McCartney was a prolific photographer and began her four decade career chronicling the musical revolution of the 1960s. In 1967 she was voted US Female Photographer of the Year and in 1968 she became the first female photographer to shoot the cover of Rolling Stone magazine. Her photographic work went on to focus predominantly on the themes of social commentary, domesticity, nature and the experimentation of printing techniques. Linda’s exhibitions have been exhibited in over 70 cities and feature in the collections of the Victoria & Albert Museum and National Portrait Gallery. Between 1967 and 1969 Linda frequently photographed The Beatles, including the Get Back sessions, and she married Paul McCartney in March 1969. As well as her photographic career Linda was a cookbook author, vegetarian pioneer, musician and mother of four.

Bert, Get off the Crane!

#NoFilter: Get Creative with Photography

Friends Change the World: We Are The Beatles