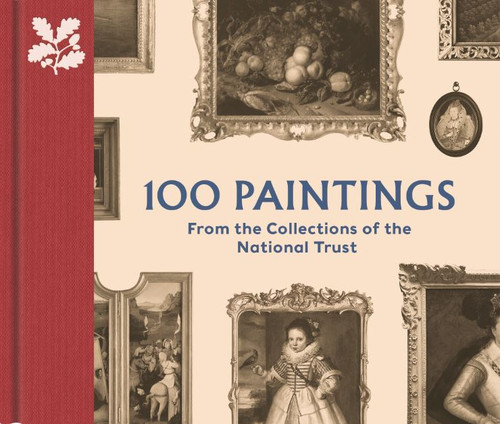 Presented in a beautiful gift format, this engaging book aims to introduce to a general audience the National Trust’s vast collection of paintings through a selection of 100 important examples from the 14th to the 20th centuries.

Paintings displayed in properties now cared for by the National Trust across England, Wales and Northern Ireland amount to one of the finest collections of historic fine art in the world. Indeed, many National Trust houses should perhaps be considered miniature ‘National Galleries’ for their counties as they display works by some of the most renowned European artists of all time including Titian, El Greco, Holbein, Rubens, van Dyck, Rembrandt, Velázquez, Gainsborough, Reynolds, Canaletto, Hogarth, Stubbs, Angelica Kauffman, Edward Burne-Jones, James Tissot, Max Ernst, Vanessa Bell, Barbara Hepworth and Stanley Spencer, to name but a few.

Selected by National Trust curators from over 13,000 works, the 100 paintings showcased in this book are arranged chronologically, each accompanied by an illuminating, easy-to-read caption. The book ends with a handy glossary of terms and a list of National Trust properties that house important paintings.


About the Author
Dr John Chu is Senior National Curator, Midlands (Pictures and Sculpture) at the National Trust. He specialises in 18th-century British and French painting and has published and lectured widely on the art of Thomas Gainsborough and Joshua Reynolds. He previously worked at Tate on the Turner Bequest and has taught at the Courtauld Institute of Art and the University of Reading.

David Taylor is the former Curator of Pictures and Sculpture at the National Trust. He is an expert on early modern Scottish art, and previously worked at the National Galleries of Scotland and Historic Scotland. He has published widely in his field and has curated and co-curated exhibitions on images of seventeenth-century Scottish built landscapes, late Enlightenment portraits, Peter Lely, Rembrandt, Stanley Spencer and the First World War, Dutch Golden Age pictures and British Baroque art.

Painting Edo: Selections from the Feinberg Collection of Japanese Art