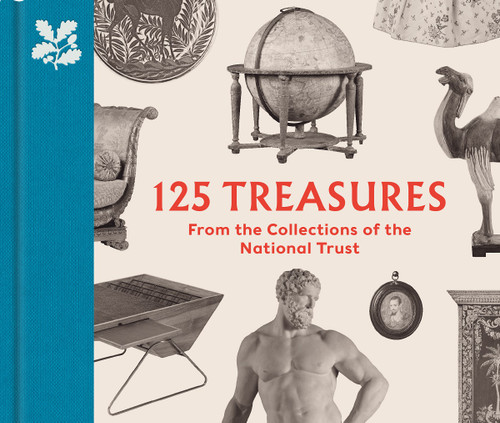 Presented in a beautiful gift format and filled with a wealth of new photography, this engaging book aims to introduce to a general audience the National Trust’s vast collections – a treasure chest of history. Arranged chronologically, starting with Roman sculpture and ending with 20th-century design, it focuses on museum-quality objects as well as important examples of decorative arts, furniture, textiles, books and items with fascinating stories behind them.

Selected by the National Trust’s curators from more than 1.5 million objects in its collections, the featured highlights include an ancient-Egyptian obelisk; Cardinal Wolsey’s purse; the first English globe; one of the earliest surviving sofas; an incredible 18th-century dolls’ house; an elephant automaton; a tent made for a sultan; a dress made of beetle-wing cases; hand-written manuscripts by Beatrix Potter and Virginia Woolf; Rodin’s bust of George Bernard Shaw; rare, early colour photographs of the Sutton Hoo discovery; a sculpture by Barbara Hepworth and paintings by Holbein, Rubens, van Dyck, Rembrandt, Velázquez, Reynolds, Stubbs, Burne-Jones, Monet and Sargent.

Each featured object is accompanied by an illuminating, easy-to-read caption, a timeline of key moments in the Trust’s history and a list of properties housing important collections items appear at the end.