The Worm: A collection of NASA archival images celebrating the implementation of the NASA Graphics Standards Manual 1975-92 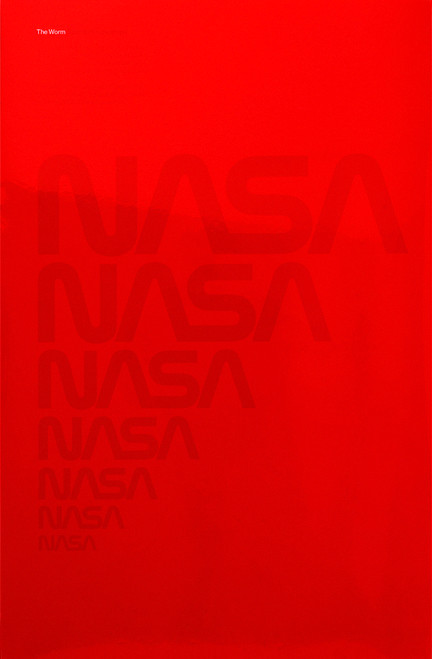 The Worm: A collection of NASA archival images celebrating the implementation of the NASA Graphics Standards Manual 1975-92

The original NASA insignia is one of the most powerful symbols in the world. A bold, patriotic red chevron wing piercing a blue sphere, representing a planet, with white stars, and an orbiting spacecraft. Today, we know it as ¬ìthe meatball.¬î However, with 1970¬ís technology, it was a difficult icon to reproduce, print, and many people considered it a complicated metaphor in what was considered, then, a modern aerospace era.

Enter a cleaner, sleeker design born of the Federal Design Improvement Program and officially introduced in 1975. It featured a simple, red unique type style of the word NASA. The world knew it as ¬ìthe worm.¬î Created by the firm of Danne & Blackburn, the logo was honoured in 1984 by President Reagan for its simplistic, yet innovative design. NASA was able to thrive with multiple graphic designs. There was a place for both "the meatball" and "the worm". However, in 1992, the 1970s brand was retired - except on clothing and other souvenir items - in favour of the original late 1950s graphic.

Until today. "The worm" is back and just in time to mark the return of human spaceflight on American rockets from American soil. The retro, modern design of the agency¬ís logo will help capture the excitement of a new, modern era of human spaceflight on the side of the Falcon 9 launch vehicle that will ferry astronauts to the International Space Station as part of the Demo-2 flight, now scheduled for May 2020.