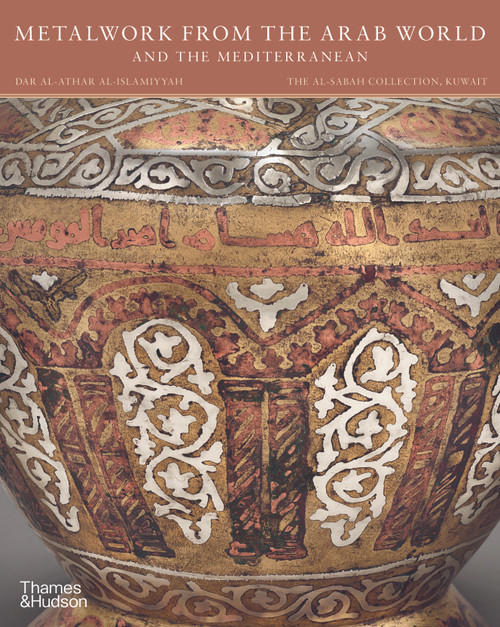 This volume presents vessels, fittings and other objects made in Syria, Egypt, Iraq and Yemen from the early Islamic period through to the end of the Ottoman era in the 19th century. The pieces include exquisite platters, serving/vessels, candlesticks and pen/boxes produced for royal courts, but also many beautifully decorated bronze domestic items, such as bowls, lunch/boxes, door/knockers, buckets and lamps.

The metalwork traditions in this book reflect the complex history of the Arab world following the advent of Islam. The collection starts in the Late Antique period, which informed the early Islamic royal styles of the Umayyad, Abbasid and Fatimid dynasties, and goes on to trace the emergence of Mosul as a centre for metalwork in the 12th–13th centuries; the courtly Mamluk style during the Bahri period (1250–1380s); the Circassian era (1380s–1517); the growth of the European export market from the 15th century; distinctive vernacular styles in Yemen during the 14th–16th centuries; and the many revivals and fusions of international styles over six centuries of Ottoman rule (1517–1900s). Finally, an enigmatic group of zoomorphic fittings that defies easy dating is celebrated for the craftsmanship and charm of its animal figures.

This beautifully illustrated volume features many important unpublished pieces and is essential reading for specialists, but it will fascinate and inform anyone with an interest in Islamic culture and history, metalwork and the decorative arts of the Arab world.

About the Author
Doris Behrens/Abouseif is Professor Emerita at SOAS, University of London, and previously Nasser D. Khalili Chair of Islamic Art and Archaeology at SOAS. Her many publications encompass a wide range of subjects of socio/cultural and art historical interest with a focus on Egypt and Syria from Late Antiquity and the early Islamic period to the 19th century, covering architecture, urbanism, material culture and the decorative arts.

The Wyvern Collection: Medieval and Renaissance Sculpture and Metalwork

In Vested Interests: from Passion to Patronage : The AbdulMagid Breish Collection of Arab Art

Flying Colours: A Guide to Flags from Around the World