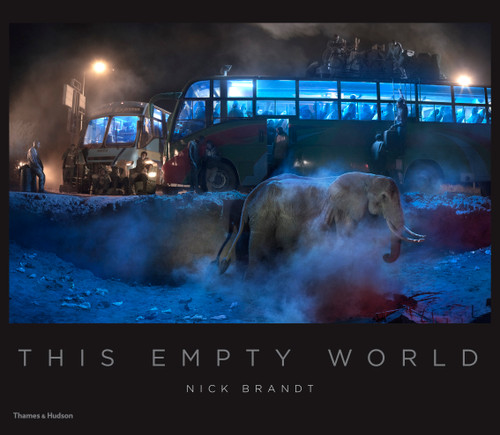 This Empty World, Nick Brandt's new monograph, features a series of dramatically staged photographs that bring together and reveal the animals and people of East Africa as the victims of environmental degradation in an emotionally powerful, cinematic way.

Moving into colour photography for the first time, the work is both a technical tour-de-force and a massively ambitious project in which several sets are constructed on a scale typically only seen in film production. Each panoramic image is a combination of two moments in time, almost all of them captured weeks apart from the exact same camera position.

Brandt first builds and lights a partial set, then waits for the animals that inhabit the region to enter the frame. Once captured on camera, the full set is built with the camera remaining fixed in place. The sets include bridge and highway construction sites, a petrol station, a bus station and even a dead forest. Completing the scene with a huge cast drawn from local communities, Brandt then photographs the second sequence. The final large scale prints are a composite of the two intricately plotted elements.

Viewed as a whole, the images vividly illustrate a world in which, overwhelmed by runaway human development, there is no longer space for animals to survive, and beg the question: what kind of world will we live in when stripped of its natural wonders.

Photographed on unprotected, inhabited Maasai community land, after the sets were removed and their elements recycled, no evidence of the images now remains in the landscape.