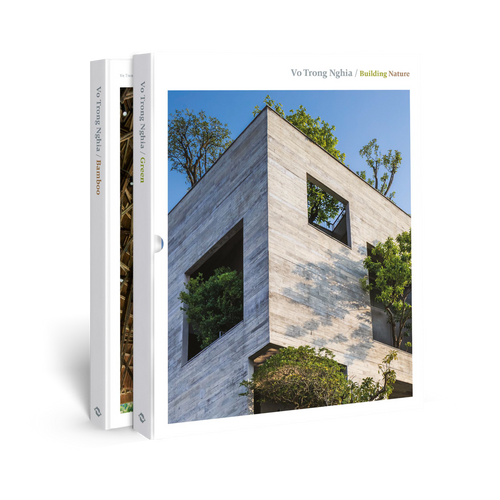 A career-spanning, slipcased monograph in two volumes presenting the work of one of Asia's most thoughtful and innovative architects.

With rising populations around the world and the pressures of looming climatic catastrophe, the work of Vo Trong Nghia is a call for architecture to transform itself from a source of pollution to a reason for hope. Nor is this idea anecdotal: the World Green Building Council estimates that 39% of energy-related carbon emissions can be attributed to buildings. An awareness of architecture’s responsibilities has permeated the profession in the developed world, while new ideas and solutions are coming from places where these issues are most acute.

Following a long recovery from decades of war, Vietnam has emerged as one of the most exciting centres of design Asia – led largely by the work of Vo Trong Nghia, born one year after the end of the Vietnam War, whose work has gained an international following. As a student in Japan, he studied under the minimalist architect Hiroshi Naito and encountered the work of the Colombian architect Simón Vélez, a proponent of bamboo architecture with its large spans and high, voluminous spaces – the ideas and teachings of both were to have a profound influence on his own designs.

The buildings of Vo Trong Nghia Architects, established in Ho Chi Minh City in 2006, make clear reference to these sources and influences of the past, and to Vo’s own adherence to the Five Precepts of Buddhist teaching. The architect's two main themes - green architecture and bamboo as a building material - form the basis of this two-volume celebration of his work. From the Wind and Water Bar, his first foray into bamboo as a building material, to resort complexes, art installations and his game-changing series of residences, House for Trees, Vo Trong Nighia: Building Nature proves that green architecture creates local relevance, beauty and elegance in its own right.

Nature's Cathedral: A celebration of the Natural History Museum building