Total War: A Peoples History of the Second World War 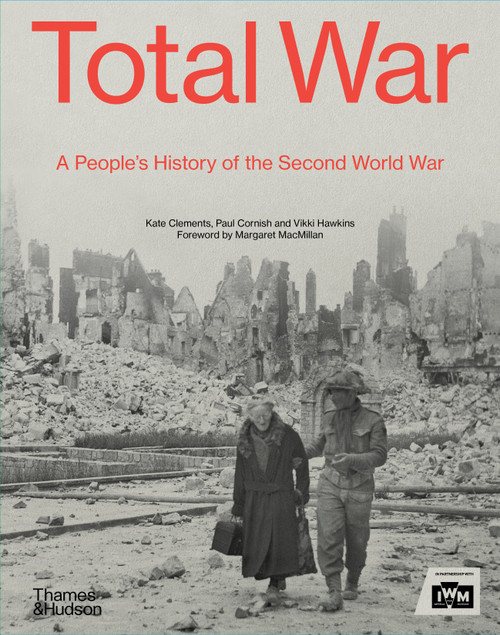 Total War: A Peoples History of the Second World War

Total War is an illustrated account of the most pivotal historical episode of the 20th century: the Second World War. It was not one single event, but rather the confluence of many simultaneous conflicts across the globe – on land, in the air, across the sea and beneath it. The state of ‘total war’ revealed nations in turmoil, destroying the boundaries between civilians and combatants and unleashing violence, death and destruction on a scale never previously experienced. This authoritative, immersive account of a conflict that forever reshaped the geopolitical landscape is told not only through compelling photographs of wartime events and detailed maps, but also through a series of artefacts that convey the real-life stories of those involved, from Europe, Asia, the United States and beyond.

Published to coincide with the much-anticipated opening of the new Second World War and Holocaust galleries at the Imperial War Museums, London, in 2021, Total War is an essential volume for anyone with an interest in the everyday realities of one of the most brutal and significant wars in modern history. Many unique images from the IWM’s Second World War and Holocaust collection are included, some being published for the first time. From German-Jewish passports and dolls made by Latvian war refugees, to Molotov cocktails and US bomber squadron flying gear, the book delves into the significance behind the deeply moving objects reproduced. With precision, sensitivity and a truly global approach, Total War offers a strikingly original visual perspective on an emotive and often controversial subject.


About the Author
Paul Cornish is a senior curator at the Imperial War Museums (IWM), and the IWM’s firearms specialist. He is the author of The First World War Retold, and has contributed to a number of academic publications relating to the material culture of conflict. Vikki Hawkins is a curator at the IWM. She has published and contributed to various conferences on the topic of displaying marginalized histories in museums, and is currently developing a research project on the material culture of sexual violence in conflict. Kate Clements is a curator for the new Second World War Galleries at IWM London. She has undertaken curatorial work on a number of exhibitions at the museum, including the Lord Ashcroft Gallery display of Victoria Cross and George Cross awards.

The Great Secret: The Classified World War II Disaster that Launched the War on Cancer

MI9: A History of the Secret Service for Escape and Evasion in World War Two

Look At This If You Love Great Art: A critical curation of 100 essential artworks * Packed with links to further reading, listening and viewing to take your enjoyment to the next level

Look At This If You Love Great Photography: A critical curation off 100 essential photos * Packed with links to further reading, listening and viewing to take your enjoyment to the next level