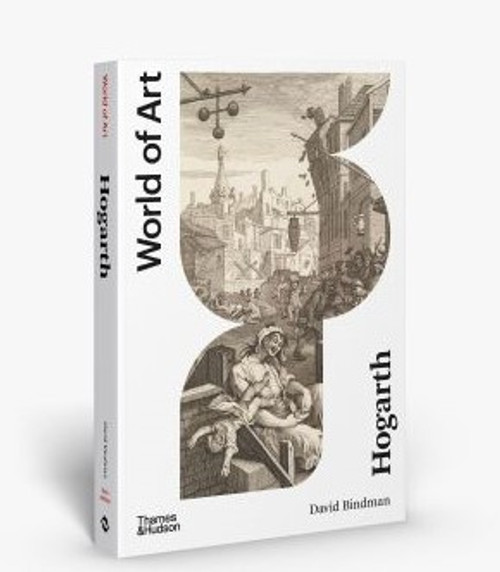 Hogarth was one of the great 18th-century painters, a marvellous colourist and innovator at all levels of artistic expression. Art historian David Bindman surveys the works of this artist whose wry humour and sharp wit were reflected in his prolific paintings and prints including The Rake's Progress and Marriage-A-la-Mode. Hogarth was also a master of pictorial satire, highlighting the moral and political hypocrisies of the day with delightful detail and comedy - themes that resonate deeply with our times. The artist was a keen observer of class and society; this new edition has been specially updated to include a discussion of Hogarth's many representations of Black people in 18th-century Britain, a subject that has long been overlooked.

Now revised with additional material and illustrated in colour throughout, this is a vivid and incisive study of the man and his art.

With 172 illustrations in colour

Review: 'A clear and well-conceived introduction to Hogarth's exuberant and complex appeal ... warmly recommended' - Times Literary Supplement
'David Bindman's text is clear and informative and the illustrations numerous and of good quality' - Spectator
'Excellent ... He is very good on the engraved series and in describing Hogarth's character' - Apollo

Contents: Preface
Introduction to New Edition
1. The Fear of Grub Street
2. Beginnings as a Painter
3. Modern Moral Subjects: a Reading of the Two Progresses
4. The World of the Progresses
5. The 1730s: Satire and History
6. The Connoisseurs and Comic History Painting
7. Portrait Painting
8. Hogarth's Africans
9. The Theory and Practice of Art
10. Approaches to the Public
11. Bathos
Bibliography

Author Biography: David Bindman is Emeritus Professor of the History of Art at University College London. He is currently a Fellow of the Hutchins Center for African and African American Research, Harvard University, and he was Visiting Professor of History of Art at Harvard 2011-17. His publications include Blake as an Artist, Hogarth and his Times: Serious Comedy and Ape to Apollo: Aesthetics and the Idea of Race, 1700-1800. Since 2006 he has been the editor, with Henry Louis Gates, Jr., of the series The Image of the Black in Western Art, in 12 volumes so far.

Lunatic: A Practical Guide to the Moon and Back

Would It Kill You to Put on Some Lipstick?: One Year and 100 Dates