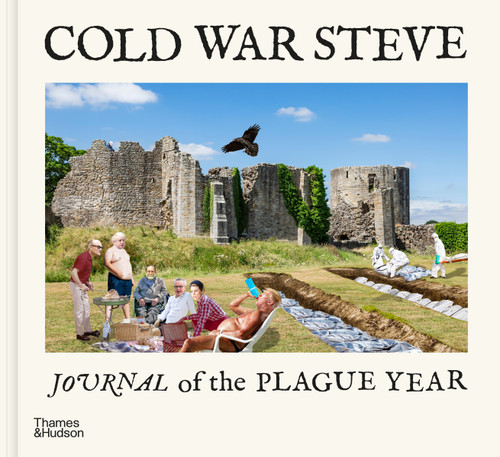 Following the bestselling Festival of Brexit and A Prat's Progress, star satirist Cold War Steve returns with a viral vengeance with his Journal of the Plague Year. Dubbed ‘the modern-day William Hogarth’, the collage artist casts a searing eye back at the last year on ‘Plague Island’ Britain and abroad: featuring a global pandemic, an inept government at home and the US election’s absurdist saga, his chronological journal spans lockdowns, G7 summits, crises and scandals, to leave no-one unscathed.

Featuring the usual suspects in despicable settings, and rife with art historical references, Journal of the Plague Year brilliantly blends world news and art in signature-style collages, each accompanied by witty commentary. Published in an enlarged format, this new tome will delight Cold War Steve’s huge fanbase, and anyone in need of humour after the grimness of this past plague year

With 100 illustrations in colour


About the Author
Christopher Spencer - aka @ColdWar_Steve - has been acclaimed as the Brexit Bruegel and a modern-day Hogarth. His Twitter feed, McFadden’s Cold War, has become a cult phenomenon. With over 330,000 followers (and counting) his Twitter following is greater than the membership of the Conservative Party. His previous best-selling books Cold War Steve Presents...The Festival of Brexit and A Prat's Progress were both published by Thames & Hudson.

Steve McCurry: A Life in Pictures

Fruits and Nuts: Recipes and Techniques from the Ferrandi School of Culinary Arts

Winterland: Create a Beautiful Garden for Every Season