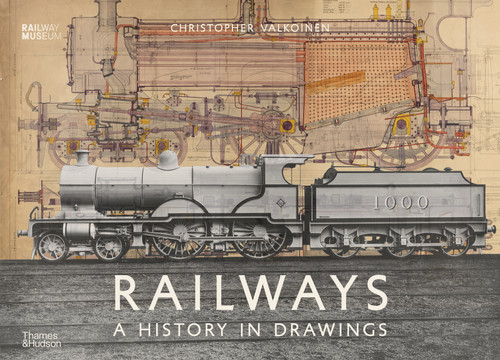 The advent of railways in Britain was a fundamental part of its economic and social revolution in the 19th century, with technical advances that were the envy of the world and chronicled from the beginning through meticulous drawings. Detailed plans were created of locomotives, carriages and wagons, as well as of stations, bridges and tunnels, to facilitate the manufacturing process and the maintenance of the rapidly expanding railway network.

Miraculously, about a million of these magnificent drawings have survived and are held in the National Railway Museum in York. Christopher Valkoinen has selected over 130 examples that tell the engineering history of great innovations and triumphs, such as the Forth Bridge, and reveal the work of famous pioneers, including Richard Trevithick, George Stephenson, and Nigel Gresley of Flying Scotsman fame. Other plans range from Queen Victoria’s royal saloon and a travelling post office to a station tea-room at York and modern experiments with a hovertrain. There are also drawings for railways around the world: the USA, Russia, Japan, India, Australia and Egypt, among others, as well as contemporary photographs and posters.

Throughout, Valkoinen provides valuable insights into the social and political impact of the railways. He also reveals how these drawings are more than a reference tool for the historian or modelmaker; they are exquisite works of art, painstakingly produced by highly skilled artists, which can be appreciated in their own right.

The Drawings of Rembrandt

Hong Kong Then and Now

I Live in the Slums: Stories